Actor-turned politician, Vijayakanth, has been announced as the Chief Minister candidate by the People’s Welfare Alliance (PWA), floated by regional parties in Tamil Nadu. This puts full stop to speculation that he will joining hands with BJP or DMK.

DMDK will be contesting in 125 assembly seats, while other parties in the PWA will contest in 110 seats in Tamil Nadu. DMDK got less than around 10% vote bank.

The development comes at a time BJP and DMK has been trying to rope in Vijayakanth to fight in the upcoming Assembly elections.

The decision of PWA has been announced after talks between People’s Welfare Alliance leaders and DMDK leader at Chennai today.

DMDK floated in 2006 and the party contested in all 234 seats in the state elections in May 2006. The party polled almost 30 lakh votes (a total of about a 10 % share). All the candidates of the DMDK, with the sole exception of Vijayakanth, lost the elections in 2006.

Vijayakanth and his party contested in the 2009 Lok Sabha polls as an independent party in all 39 constituencies in the state, winning no seats.

The party won 29 seats in the 2011 assembly election and became the official opposition party with Vijayakanth as the opposition leader.

BJP State President Tamilisai Soundararajan reacted to the development and said that Vijayakanth is wasted his political career by joining hands with PWA. She said her party is not lost anything by loosing Vijayakanth.

She ruled out possibility of BJP joining PMA. 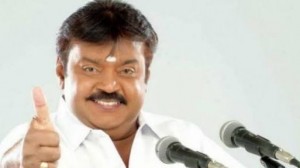