Google has nearly tripled the number of countries that can access Android Auto. The smart car interface now has functionality in 18 new countries plus the territory of Puerto Rico; the list now includes potentially huge markets like India and Russia, along with several countries that mark a major expansion into South America. 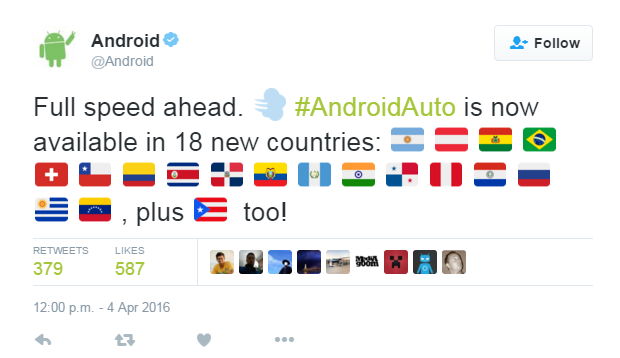 Google announced the news in an emojified tweet from the official Android account.
Android Auto is also available in Australia, Canada, France, Germany, Ireland, Italy, New Zealand, Spain, the UK, and the US. Getting car manufacturers on board with preloading the system on their vehicles is another matter entirely, although it can now be pretty easy to retrofit your dashboard with an Android Auto (or Apple CarPlay) head unit.

One thought on “Android Auto comes to 18 new countries including Brazil, India, and Russia”