Computing giant Nvidia has announced the worlds first “supercomputer in a box” – the DGX-1. With a cool 170 teraflops of performance, the machine is designed to tackle the complex worlds of deep learning and artificial intelligence, areas of research requiring massive amounts of computing power.

The DGX-1 uses the company’s newly developed Pascal architecture that recently showed up in its beastly in-car supercomputer. The DGX-1 has eight Tesla GP100 GPUs, each with 16 gigabytes of memory. Alongside that, the knowledge hungry supercomputer contains 512 GB of RAM, and four 1.92 terabyte solid state hard drives. At 60 kg (132 lb), the DGX-1 might be an under the desk job. 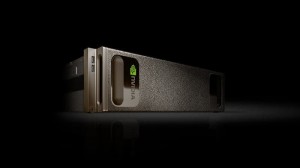 “As neural nets become larger and larger, we not only need faster GPUs with larger and faster memory, but also much faster GPU-to-GPU communication,” said Director of AI research at Facebook, Yann LeCun, when presenting the DGX-1 at yesterday’s GPU Technology Conference in Silicon Valley. Nvidia’s newly released Nvlink (found inside the DGX-1) aims to do just that, specifying rates 5 to 12 times faster than the current PCIe standard.

The machine comes pre-loaded with an array of tools for developers, namely Nvidia Cuda, a deep neural network (DNN) library that helps create and design said networks. Alongside Cuda, an array of standard DNN frameworks are included, namely Caffe, Theano and Torch. Nvidia offers full support for the system through the cloud, including software updates and management systems.

Deep Neural Networks allow computers to emulate the human mind in order to recognize things we might think as simple, such as determining a cat from a dog. In recent years, DNNs have found multiple uses, from writing your emails, beating Chinese Go masters and even putting you on the fast-track to being the worlds next Eminem. Nvidia explains the advantages of deep learning with a video shown at GTC, which you can see below.

There’s no solid release date as yet, but for consumers wanting to get their hands on a DGX-1, you’d better start saving – it will retail for US$129,000.