Having said that, Vikram Kumar’s ‘24’ is easily one of the best sci-fi entertainers ever made in Indian cinema, it is filled with meticulous writing and incredible creativity. Of course, here too we have doltish romantic sequences and unnecessary songs but still, ‘24’ is Indian cinema’s baby step in achieving international standards.

Sethuraman (Suriya) is a rich scientist, who is on his mission to create a time travel watch but his brother Athreya (another Suriya) is a deadly monster, whose aim is to control time and for that, he needs the device. What happens next is a series of incidents based on Chaos theory that puts Athreya to coma and Sethuraman loses his life along with his wife Priya (Nithya Menon) but somehow manages to save the time travel watch and his infant son Mani (Suriya again) as he was handed over to Sathya Bama (Saranya Ponvannan).

26 years gone, now Mani is a happy go lucky watch mechanic and when he gets the key for the watch case, he finds out the special power of the device, which also helps him to woo Sathya (Samantha). Meanwhile, Athreya wakes up from coma to get to know about his paraplegic condition and badly wants to travel back in time to get back his youth. Can Athreya travel back to the past? Can Mani alter all the gory things that happened to his mom and dad?

The biggest strength of ‘24’ is Vikram Kumar’s whip-smart writing, the director has simplified the time travel concept in his screenplay that even a six year old kid can understand . At the same time, there are few top notch sequences that test the smartness of audiences, especially the film ends on a surprise note where everyone will be smitten by the director’s intelligence. Also, the interval block one of the best scenes in the film was a total stunner and comes as a complete surprise!

Although the romantic portions in the first half are speed breakers, in order to explain to our audiences, Vikram Kumar has no other options left but to simplify heavy concepts through comedy sequences. But all those romantic scenes and songs hamper the smooth proceedings. Some trimming is required in the first half which is almost 90 minutes.

‘24’ is undoubtedly the show reel of Suriya, the film belongs to him. Be it the innocent Sethuraman, monstrous Athreya or charmer Mani, Suriya has given his heart and soul for all the three characters. The versatility in Suriya’s body language and mannerisms are huge plus for the film. Among the three characters, Athreya is a complete show stealer while Mani scores in the later part of the second half, where he equally uses brain and brawn. 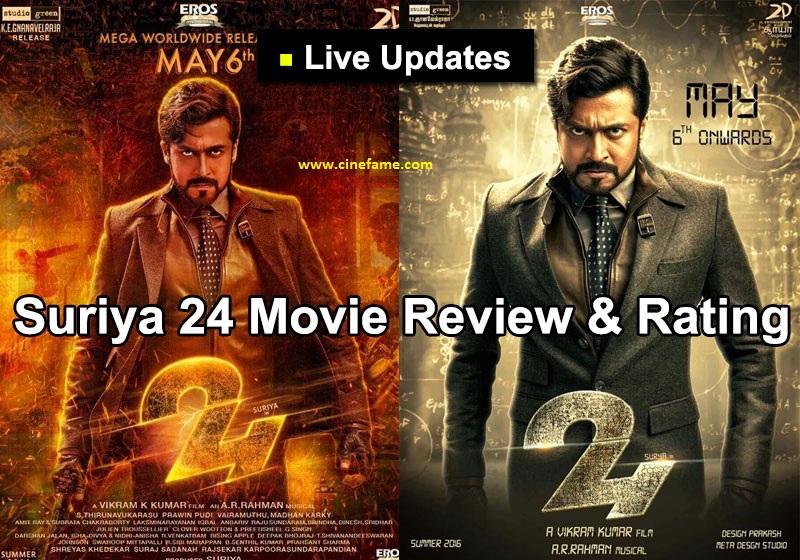 Both Samantha and Nithya doesn’t have big scope in the movie, but are adequate. Samantha is good in some of the comedy scenes too. Saranya Ponvannan has once again justified that she is tailor made for lovable mother roles.

Hats off to DOP Thiru for the stunning visuals in the film. He has beautifully mixed Poland and Pune scenery to create the perfect outdoor action scenes. The production designs of the Bengali duo of Amit Ray and Subrata Chakraborty are top class especially the lab scenes shown in the beginning. Wish Prawin Pudi would have trimmed the film a little more.

Rahman’s songs are big plus for the film and the maestro scores well in the BGM of Athreya’s sequences, especially in the pre-climax portion.

Overall, ‘24’ is a good attempt from Vikram Kumar and it is a must watch